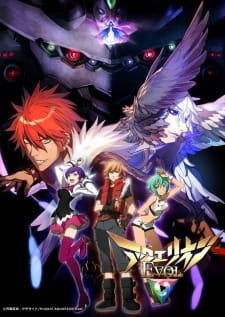 2012 ・ TV ・ Finished Airing
Native: アクエリオンEVOL English: Aquarion Evol
Rating
2012 ・ TV ・ Finished Airing
12,000 years after the events in Genesis Aquarion, humans live on the star Vega under constant threat of trans-dimensional beings called Abductors. These enemies originate from Vega’s sister star Altair and raid Vega for human life. As a countermeasure, an organization known as Neo-DEAVA formed to combat the Abductors. They pilot advanced mecha suits called Aquaria and are strictly separated by gender. Boys and girls are not allowed contact; they are even restrained from fighting on the same battlefield. However, events take a shocking turn when an advanced Abductor mecha suit joins the fray. Two teenagers, Mikono and Amata, are dragged into the conflict. Unknowingly, Amata performs a taboo when he summons an Aquaria and initializes what is called the Forbidden Union between male and female Aquaria. Neo-DEAVA is shocked, and the repercussions of Amata’s actions are much farther reaching than he realizes. How was he able to summon an Aquaria? Where did he learn to form a Forbidden Union? And why was Mikono also able to pilot the mecha suit?
Episodes 26