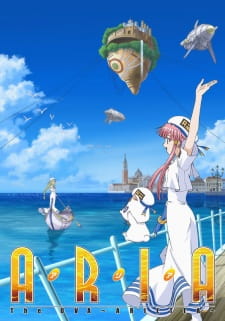 2007 ・ OVA ・ Finished Airing
Native: ARIA The OVA ~ARIETTA~ (アリア ジ オーブイエー ~アリエッタ~) English: Aria the OVA: Arietta
Rating
2007 ・ OVA ・ Finished Airing
Akari Mizunashi dreams of life after attaining her goal of becoming a Prima Undine, but upon waking realizes that she might not actually have the confidence to run Aria Company on her own. Wary of the future, she seeks advice from her mentor Alicia Florence—one of the three great "Water Fairies" of Neo-Venezia. Much to Akari's surprise, Alicia reveals her own struggles of the past, but also shares the steps she took in overcoming her self-doubt of running the company and taking on an apprentice. Finding solace in her teacher's words, Akari prepares to embrace whatever trials she must overcome on her path toward achieving her dreams. [Written by MAL Rewrite]
Episodes 1