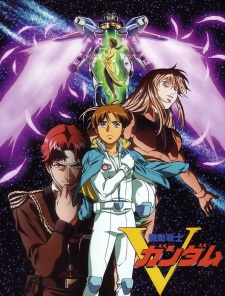 1993 ・ TV ・ Finished Airing
Native: 機動戦士Vガンダム English: Mobile Suit V Gundam
Rating
1993 ・ TV ・ Finished Airing
In the year 153 of the Universal Century, the tyrannical Zanscare Empire has taken hostile control over Side 2, a space colony outside of Earth's orbit. Following in the footsteps of the long expired Principality of Zeon and the more recent Crossbone Vanguard, Zanscare rules over its subjects with cruelty, routinely using a large guillotine for public executions. Living in Central Europe, space immigrant Üso Ewin joins the League Militaire, a militia made up of civilians frustrated with the Earth Federation's inability to combat the Zanscare Empire. Üso's latent abilities as a psychic Newtype awaken and allow him to pilot the Victory Gundam, the only mobile suit capable of holding off the elite BESPA forces of the Zanscare Empire. Hoping to protect his best friend Shakti Kareen and locate his parents within the ranks of the Federation, Üso fights on with the Victory, striving to bring an end to the empire's reign. [Written by MAL Rewrite]
Episodes 51